Toe Tapping to the Music Also Happens On Stage 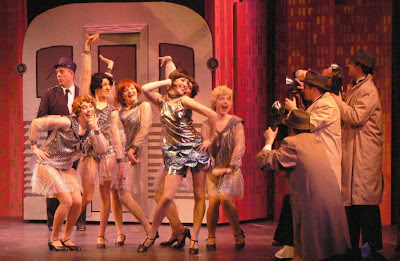 And now for something completely different. No, I am not talking about Spamalot, as the Pythonian phrase might suggest, but rather I mean something different in South Sound musical theater. “My One and Only” opened last weekend and continues with the second week of its run tomorrow at the Tacoma Musical Playhouse. It is a Tony winning Gershwin showcase from the 1980’s that originally starred Tommy Tune and Twiggy. 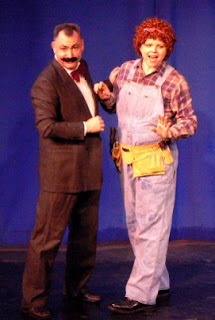 What makes it different is not the acting, comedy, musical numbers or costumes that you might find in any number of musicals around town. In fact, the boy meets girl, boy loses girl and then boy wins girl back story is fluffier than in many shows. And no, it is not the fabulous mustache that I wear.

It starts with the 17 piece live orchestra playing Gershwin. I could just sit backstage or sneak over to just behind the curtain and listen to these folks all day. The show could work as a stand alone concert based solely on George and Ira’s music played by these musicians.

But for uniqueness, based on its availability in the South Sound, the show is an amazing tap dance showcase. Vince Wingerter, as Captain Billy Buck Chandler, wears tap shoes in every scene he is in. That should say something right there. Jenny McMurry plays his love interest, Edythe Herbert, and the two have a wonderful dance number they perform from one scene, to scene change, to next scene that I marvel at from the wings every performance.

But, as it should be, the show stopper is the twelve minute long tap dance extravaganza (yes, I said extravaganza, though admittedly there are no fireworks, mini-tramps or animals) involving almost everyone in the cast, that is the finale of the show. Kudos to every parent who made the cast take lessons and Jon Douglas Rake for giving them a chance to show off what they have learned.

No I don’t tap dance, but everyone else does. They are a great cast and they get their due in a very positive review of the show from the Tacoma Weekly’s Krista Curry.

Thank you to Kat Dollarhide who provided me with a few photos from the show. Kat always does a great job of providing many photos of each show at the TMP.
- February 28, 2008

The Under the Stars events at the History Museum amphitheater are great. If it is a beautiful day you can't beat it.

No tap dancing but great music.

"You Must Have Been A Beautiful Baby", "Jeepers Creepers", "Hooray for Hollywood", "That Old Black Magic", "Moon River" and "On The Atchinson, Topeka and The Santa Fe".