As I went through my daily news fix, I noticed something different from Google. They invited me to add a politics gadget to my iGoogle page in order to better follow the events of the day as they unfolded. Nice filters and tabs allowed for me to move from blogs, to news, to maps and videos, all based solely on the candidates I wanted to track. 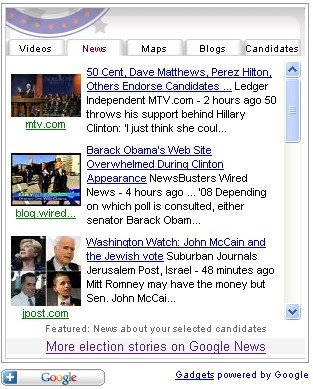 But it was another tab that caught my attention. In a cooperative service between Google and Twitter, messages from around the nation popped up to give you a sense what was on the nations mind. (or the subset of the nation that has Google, Twitter and reports on their activities).

Making it happen is Twittervision which says about itself:

What is Twittervision?
A real-time geographic visualization of posts to Twitter. Samuel Morse, meet Carl Jung.

How do I get on Twittervision?
Join Twitter and post. You must have a location and an image defined to appear on the public feed (and to be located on the map). 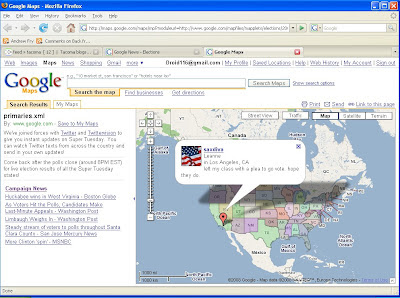 I admit I am still not ready to weigh in as to the value of the service. It was interesting, like twinkling lights or the ripples in a river. Twitter posts from Maryland, then Texas, then California would pop up, following one another with the quick note that they were out to vote, surprised by West Virginia or off to a party. I actually enjoyed watching it for a while. 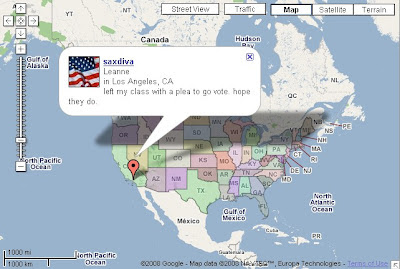 But my interest was more centered on my own location. What if I could drill down on the map and see what the folks in Washington were saying. Or the Puget Sound region. Or best yet, my own city of Tacoma.

Unfortunately, every time a Twitter entry made it's way to the map from another region, the map would re-adjust itself to hone in on the area the post came from. A bit frustrating.

I do love the concept however, and hope that by the national elections, the ability to go local will be part of the gadgets feature set.
- February 05, 2008

The word "Twittervision" reminds me of the word "Wonkavision" from the Charlie and the Chocolate Factory book. New technology doing the same old thing in a faster, sleeker, and more interesting way.