Today I am heading out to Bellevue to give a talk called "Twitter While You Work" to the Jay Ray Think Lab conference attended by health care marketers. I spoke at a Think Lab last year and kept everyone awake enough to be asked back again this year. Given I will be talking after lunch on a gorgeous 80 degree day, keeping them awake again will be a tall order.

I will have to use short declarations of 140 characters or less. At least if I were microblogging. But that is only the topic and not the format.

I was slow to pick up on the value of microblogging. I thought it was interesting and followed along for certain, but wasn't going to be sold on the technology until I started seeing unique, valuable results from its use.

One of the sites that I took a look at and used was QuillPill, which was a creative writing site for those who wanted to write from their handheld devices. I wrote about it here.

Where it became apparent that Twitter was going to grow and become a successful and valuable tool was in Journalism. Reporters and newspapers alike have picked it up as a useful tool for breaking news and aggregate reporting. It is the speed and brevity of the delivery that makes it so valuable.

Yesterday, Paul Farhi provided a pretty thorough review of its use in the American Journalism Review. He does did in to it a bit but I would have liked to hear more about his personal experiences using the tool.

I have also looked into Twitters use in Education, and will continue to do so. My hopes for some good data came from an August 2008 Blog By Carol posting which touts 50 ideas on using twitter for education. I was a little disappointed when the next four sites I visited to expand on the topic referred back to hers. I have used blogging over the last several quarters as a teaching aid, in particular for short writing assignments and commenting, but have yet to include microblogging. Perhaps in the Fall.

As for Healthcare. Well, surprisingly it is being done, which speaks to the universal value of the tool. It has cross industry value.

It is not as mature as the use in newspapers and by journalists, but it is being testing on several fronts for its usefulness.

My favorite for making you think. Twittering from the operating room. I would like to know why this is a good idea, but I am not a surgeon and have not had the opportunity to twitter in the OR yet.

A thought just occurred to me. There are a lot of online communities, many of them powered by their own currencies. Has anyone set up an exchange rate web site for those who want to travel to other virtual places.

A adventurer in Silk Road may want to buy a potion or a new sword, or maybe he wants to convert his holdings over to the currency of trade at some other online outpost he wishes to visit. Just like going over to the window at the airport and exchanging your dollar for pesos.

Obviously, it is an idea fraught with peril and ripe for abuse. You already have automatic gold collector bots that simply are programed for accumulating wealth to spend on items online.

Then again, plenty of marketplaces have cropped up with the notion that you need to tread carefully.

John D. Sutter and his article on CNN.com talks about the power of virtual currencies. He gives examples from "hi5" which uses hi5 coins, Linden Dollars from Second Life and WoW gold from World of Warcraft. He has some interesting thoughts about the problems that start to creep in to growing, functioning virtual currency markets that mimic our real world economy. Taxation, interest rates, and inflation for instance.

Still, I would love to see the exchange rate and marketplace between Second Life, WoW and Neopets. Just to get a sense of how we value each.

It might extend into the real world as well. I mean, you can buy virtual dollars with real dollar. If fact, given our use of credit and debit cards, aren't our real dollars virtual in many ways already. I think I have paid for 95% of my lattes over the last year with digital deductions as opposed to paper exchanges.

Maybe it would allow for another sub economy to arise as well. Morgan's Brain takes a look at possible local currency for Tacoma, with Beautiful Angle dollars and Stowe coins are given as examples. Heck, we already know the exchange rate for Stow coins. Fifty cents at the Red Hot.
- May 22, 2009 2 comments:

Five Things I Would Have Posted

This is the longest period of time that I have gone without posting in two years.

I have been busy with many different things, to a point where sitting down and putting together a post of any substance is difficult. In thinking through what combination of business and psychological barriers are at work, I pondered on the idea that maybe I didn't have anything to post about. I abandoned that thought when I quickly came up with several things that I could have written on had I put together the time and effort.

1) I met with the CleanTechOpen people today at the Columbia Tower in Seattle. They are near the end of the submission period for companies wanting to participate this year, which ends May 30th, and are already planning for next year. It is not to late to submit if you are an early stage company with less than 500,000 dollars in outside investment that wishes to be mentored and marketing through this West Regional initiative. If you are a company of at least two people, with a good idea for a business related to clean energy and/or sustainability, that can be articulated in a four page executive summary, you still have time. I will blog more at a later date. (what a view from the 76th floor of the Tower taken with my camera phone). 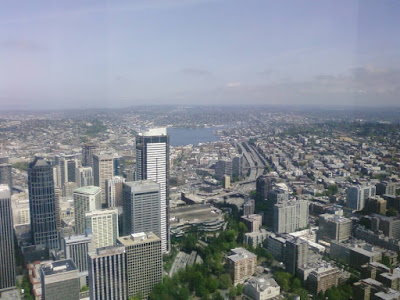 2) I taught origami at Crescent Heights on May 1st. I have posted on this sort of thing before, but it was a third grade class and the third model we chose to fold what the traditional Lily. That was an adventure.

3) I interviewed Dawn Lucien. One of Tacoma's most active and influential citizens agreed to allow me to interview her about her life in politics, Tacoma activism and civic projects. From the time she was the youngest delegate to the 1948 Democratic Convention, through her years on the City Council, Norm Dicks office, the Utility Commission and the UWT advisory board, it has been a fascinating and involved life. She is still on the UWT board and politically active. I will likely blog more another time.

4) The Producers is a show I blogged about the opening night arriving. But the cast and show are so much fun that I am certain I would have covered more (with pictures). The show has left them laughing or made them leave. Almost exclusively the former but a smidgen of the latter. What else would you expect from equal opportunity Mel Brooks?

5) I was invited to Olympia to give a talk about social networking applications and how they are being used in marketing of education. Though I spent more time on the evolution of the tools than the marketing itself, (they were all experienced marketers) we did get into some good "present use of" discussion. It was interesting to be presenting to a room of people and three other rooms via remote videocasting.

But I have not posted on these things, or others I could have.

6) My awesome purchase of an RR Anderson original.

7) Frost Park Chalk Off Season Two (sure, there have been plenty of posts, but none in verse)