Erik Hanberg is guest blogging today.  Check his site out at http://erikhanberg.com/


In the spring of 2015, a group of friends and I went to Portland, Oregon to “escape the room.” (An escape room, if you don’t know) is basically a chance to get locked in a small room with a group of friends or coworkers and have to figure your way by solving puzzles, figuring out clues, and then communicating with others in the room. It was an absolute blast. I came away thinking that I wanted to create an escape room in Tacoma.

The idea of an immersive experience with a ticking clock and lots of puzzles really appealed to me. There are many escape rooms all over the country, and I knew it was a matter of time before one came to Tacoma. I wanted to be involved! I started talking about it with friends, but soon realized that two kids, a business, several unfinished novels, and a seat on the Metro Parks Board might be too much to also add managing an escape room. Fortunately, my good friend Andrew Fry was eager to start one.

He created Adventures by Appointment and wrote a script for the business’s first escape room.

He called it The Last Escape. Using his connections in the theater world, he brought together a team to build a sumptuous set and an engaging mystery. I loved participating in The Last Escape in my own small way, but it made me even more excited to create a room with Adventures by Appointment.

So when Andrew approached me about a new room, I jumped at the chance. 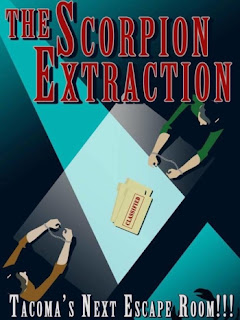 I’m happy to say that The Scorpion Extraction, the next room of Adventures by Appointment, is open and ready to go. I wrote the “script” for it, which is a funny thing for an immersive theatrical experience. Basically it means I laid out the premise: here’s the general storyline, here are the twists, and here is the puzzle path that a group will have to follow to get out of the room. But that’s only a thumbnail of what’s needed to make a room work.

The production team at ABA are the ones who realized the vision.

My puzzle path was fun, but it was sometimes impractical (at one point the script would have required a loaf of bread be used for every run of the room, which is probably the very definition of impractical). Jen and Blake straightened things out and brought their experience from The Last Escape to bear on the creation of this room, which allowed us to jump over hurdles and figure out what would be workable and fun. And the actors who inhabit the roles needed in the story will make each show slightly different, depending on the mix of actors and the questions they get from the group trying to escape. So there’s a real improv nature of this kind of experience that I only provided the loosest of sketches for. I got to participate in some of the tech rehearsals in preparation for opening, and it was a joy to see things in real life.

I’ve written a few plays over the years, but this was a particularly fun experience because so much of the joy of it comes from things outside the “script.” So. The Scorpion Extraction is now open.

You are part of an FBI recovery team getting ready to extract an informant who has been feeding information to the FBI on the dangerous and powerful mob boss known only by the code name Red Scorpion. However, when you and your team arrive, it becomes difficult determining just exactly who is who. Be careful not to side with the wrong person, as it could be a fatal error. Can you rescue the informant before the Red Scorpion’s henchman reach you?

I think it’s a blast. If you would like to book a group for either The Last Escape or The Scorpion Extraction, you can do it on the Adventures by Appointment website.