During the month of December I am featured on the program Business Matters talking about "word clouds" in the Tacoma Means Business segment.  In this segment, I am particularly ill dressed and my hair is quite disheveled.  My fault of course as I took time off from a rather busy week of classes, work and family activity to record the segment.

I generally do three to four segments a sitting, so I believe I am representing myself as somewhat slovenly for the months of Oct through December.  I just wrapped up four more last week so at least I will be in a nice jacket with a reasonable hair situation four the first third of 2015. 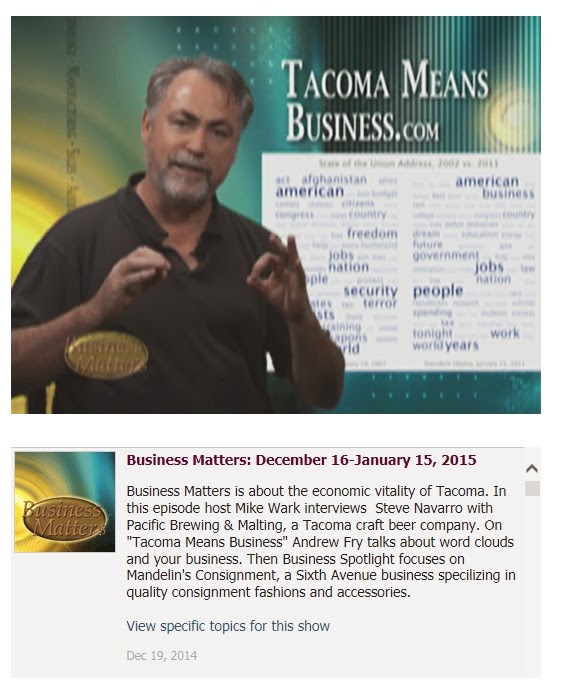 I started doing the segment back when it was called Economic Gardening about five years ago.  They changed the name when it became clear that too many people thought it was a gardening segment.  I can imagine viewers writing in to complain about the decided lack of plants.  At that time it was on a rotating basis with other industry experts.  In all I have probably recorded about 35 or more segments to date thanks to producer David Gordon putting up with my winging it half the time.

What is funny is that I never have thought about it much, other than I enjoy doing them, but when I was younger there was nothing more that I wanted than to be a television reporter.  My first few years of working were with KIRO television in the news room as a floor director/chyron operator.  I then went to the film room (yes, we would run film to be shown on television and I would trim down the movies and shows to fit the time period) and eventually worked for PM Magazine for a while.  My first company out of college was a video production company before I changed careers and went into the field of software and application development.

At this point I am simply happy to be able to do what I love.  Teaching, connecting people, organizing conferences and entrepreneurial events, raising a family and occasionally showing up on Channel 12 in the South Sound on Business Matters, hosted by Mike Wark.