SEED to start Planting this Friday

I attended the West Sound Technology Professional Association (WSTPA) CleanTech Summit last night and was glad to hear of movement on the SEED project in Bremerton. The event was well attended and included speakers from both Congressman Jay Inslee’s office as well as Senator Cantwell’s. The meat and potatoes of the dinner event, aside from either the pork or the chicken, was a set of presentations by Bert Gregory, President and CEO of Mithun, (Architects, Designers, Planners) and Tim Botkin, Director of the Kitsap SEED Project (Sustainable Energy and Economic Development).

The SEED project has been germinating (I crack myself up) for some time and the presentation by Bert Gregory give some inspiring architectural detail of what the buildings and grounds would look like. The grounds are representative of the type of work Mithun specializes in. The press release from the company gave the intention they were following.

Mithun is targeting LEED Platinum designation to showcase the highest level of sustainable development and business operating practices. Pioneer companies at the Kitsap SEED business park will have the joy of inhabiting a space that demonstrates and promotes their technologies. Mithun's master plan is built on an infrastructure of renewable energy sources. To meet water needs, site design includes water collection, treatment, and re-use strategies. 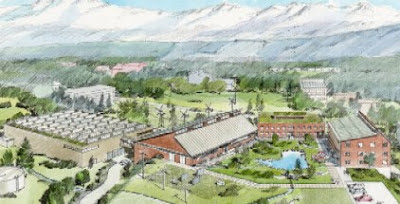 The Kitsap SEED project furthers Mithun's mission to provide a sustainable world for future generations. Mithun is a founding member of the Washington State Clean Technology Alliance. The US Green Building Council has certified ten of Mithun's projects, and four Mithun projects rank among the nation's Top Ten Green Building Projects according to the American Institute of Architects (AIA) and its Committee on the Environment (COTE).

This is a bold and challenging project, and there have been overt evangelists and vocal nay sayers to its viability and the likelihood of the complete project blossoming (there I go again). Its effects would be felt throughout the South Sound region and would include research and development opportunities with WSA Vancouver and the Institute of Technology here at the UW Tacoma. Tim Botkin makes it clear that he is aware of both sides of the belief spectrum when he talks about the “world class” intentions of the project and the logistical advantages and disadvantages of the region it is designated to reside in.

Whatever your position, there is one thing is that is not in doubt.

This Friday they are breaking ground for the first POD of the business and research park.