Kevin Freitas came by the Living and Working class recently to discuss his blog and his work. He was received well by the students, as evidenced in their own blog entries. The longevity of his participation in the blogging community, the uniqueness of his site and the thousands of photos that he has aggregated over time were part of the conversation. Photo safaris, community involvement and gaming cheats were also on the agenda.

We talked about the fact the Kevin built his own blogging engine, and then also fashioned a mechanism by which entries from all around the Tacoma blogging ranks could be funneled through a single site, just like a news feed. That of course would be FeedTacoma, one of my favorite tools in the South Sound online world. (Yes, RR, we also talked about the Tacomic).

The big announcement though, was the introduction of the ability for those who have accounts with FeedTacoma can start their own FeedTacoma blogs using technology that he has built into the system. Previously, account holders could participate in the forums and build events into a calendar. Now with the blogging capability he has almost created a hyper-local Google (sans search).

The setup and use are extremely simple.

Go to your account (or create one if you haven't already) and Start an Entry.

Fill in the blanks. In particular I like the idea of a subtitle on the blog entry, something not available here on Blogger.

The formatting buttons were familiar and easy to use.

Overall a solid start, with two features I would like to point out in particular.

Number one, the requirement of tags (and the explanation of what they are). I like to see that the tool is making tags a mandatory part of the post. I would in the future like to see a more illustrative reasons behind it. The idea that tag clouds, searching tags across blog entries and general organization of the users blog would be helpful to any new and occasional users. 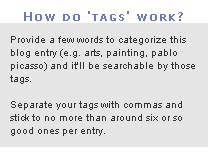 Secondly, I loved that I could resize my photo within the blog entry and that I could drag and drop it on to the page. Very nice. 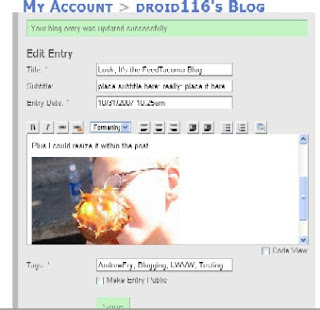 When I was through with my post, I kept hopping over to my new blog, but I didn't see the entry there.

I finally figured out that I needed to select the "Make Public" button to be able to see it there myself. 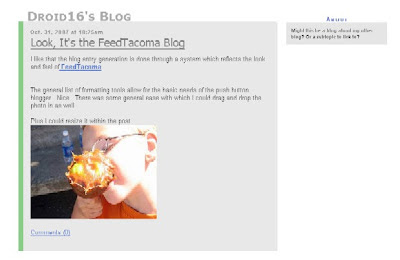 For those who already blog on other engines, it will likely be hard to switch, but if you are starting a new blog, it is quite nice. You can also tag Tacoma to your posts in order to immediately move them into the FeedTacoma feed.

Thanks for the props Professor!

was your class thrown by the NSFW rating?

We did not discuss the Not Suitable For Work rating, as I did not know what NSFW meant until I looked it up later.

As for gnomes, drawn or otherwise, the only one visiting the class was that Gadsby fellow.

they say the best teachers are the ones learning something new everyday.