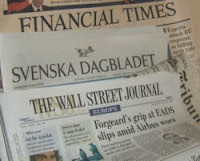 With about one quarter of visitors to newspaper web sites coming from search engine results, ( according to data released last week from a custom Nielsen/NetRatings study for the Newspaper Association of America (NAA)), it is no wonder that "search engine optimization" was one of the discussion groups at the ONA event last Friday. The ONA is the Online News Association and their event sold out here in Seattle with over 90 journalists in attendance.

The News Tribune's Mark Briggs was there and shares a little of his experience on his Online in the South Sound blog. What is also heartening is that he reports around ten or so of his cohorts from the Trib were there as well.

Mark is the Assistant Managing Editor of Interactive Media at the paper, where he has been since 2004. Prior to that he was New Media Director at the Herald in Everett for four years. In the bio for the event, they mention a book he has written that is coming out soon. The title is "Journalism 2.0: A Guide for Journalists to Survive and Thrive in the Digital Age". (I have heard from Mark and if all goes well it will be out in June)

It is another example of how the South Sound is very representative of how media, news and information is changing.
- May 07, 2007