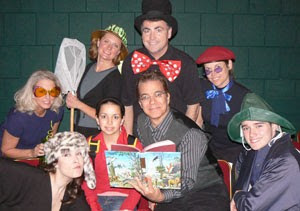 For all the time I spend thinking, talking and writing about technology and the virtual world, you might wonder where a tangible world balance comes in.

Balance is about work/life, yin/yang, give/take.

For me, the quest for something tangential comes through live theater and musical theater in particular. When doing theater you are at a heightened state of the senses for a predetermined period of time.

You are hyper aware of everything around you because you are being counted on to hear the cue, sing the song, grab the prop, move the scene around and quite often (gasp) dance. Picking up the pace or the dropped line requires you think on your feet and that you can understand visual cues from the other actors. I would mention the taste and smell aspects of it, but if anyone has been backstage in a crowded dressing room you know I don't need to go there.

Most of my experiences come from shows at the Tacoma Musical Playhouse. Though I have been in other shows in different venues, I consider that stage my home base. I hope that my good fortune in being cast in shows there continues.

Currently, and for one more weekend, I am in the Tacoma Children's Musical Theater production of The Fabulous Fable Factory as Wadsworth, the Word Worker (and Lion, and Ant and Mouse). A bonus goes to the fact that Cassie, the Character Conceiver (my wife) is in the show with me. Not to mention the cast and director are great to work with.

If you're in the South Sound and have small children, bring them on by for one of the two remaining matinees. If you are interested in knowing more. The Volcano and the Tacoma Weekly both have reviews posted.

That is not to say that technology and the web haven't changed how theater is sold, supported, managed and produced. But that's for another time.
- May 24, 2007

We tried to go last weekend, but the budget intervened. This weekend, hopefully!

It is interesting to think about how the visual arts (including art, theatre, and music) could become less supported due to the proliferation of various types of electronic devices that are supposed to support "communication." Nothing can compare to live experiences as they bring us to real life with others.

I think support for live arts ebbs and flows. Though we might be putting more time in to electronic forms of entertainment, over time I think it will create a greater appreciation and support for the visual arts as a counterbalance.