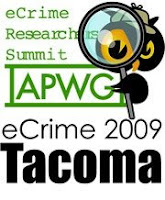 I had lunch with Chris Richardson, Director of External Affairs for Internet Identity, and Foy Shiver, Deputy Secretary-General of the Anti Phishing Working Group, on Thursday to talk about an upcoming conference in Tacoma.

The Anti-Phishing Working Group (APWG) is a well connected, industry sponsored association which focuses on eliminating identity theft and fraud which results from phishing and email spoofing. Their full charter expands to combating other forms of eCrime.

In conjunction with this effort and the 2009 General Meeting, they have plans to hold the third APWG eCrime Researchers Summit here in October of this year. It looks to be sometime in later October, around the third week, with dates to be confirmed soon. They had originally hoped to hold it earlier in October but there were not enough hotel rooms available to accommodate the conference. With tourism in Tacoma picking up and the growing success of the convention center, that will not be the last time we hear of that problem.

The conference itself is described by the organization as such:

eCrime '09 will bring together academic researchers, security practitioners, and law enforcement to discuss all aspects of electronic crime and ways to combat it, including:

* Techniques to assess the risks and yields of attacks and the success rates of countermeasures.

They will be issuing a call for papers soon, and hope to get folks like the "grey hat" student organization and faculty involved as well.

Events like this happen here because of efforts and encouragement from folks like Chris at Internet Identity. Given that Internet Identity, is a growing company with roots in Tacoma, it is more evidence of the strength we have in an information assurance and data integrity cluster here. "Internet Identity is focused on helping financial services, e-commerce and internet services companies protect their users against phishing and other forms of online fraud."

It was great meeting Foy and am looking forward to an international conference being held here later in the year.

PS: Here is scholarship information in regards to the conference.

The APWG eCrime-Fighter Scholarship program will promote counter-ecrime research by encouraging participation in the APWG eCrime Researcher Summit. Participants submitting papers and posters to the 2009 Summit are automatically entered into the program. This program will consist of both cash and travel awards based on the results of the blind paper and poster review process.