As was expected, everyone was challenged and had a good time at the CCDC (Collegiate Cyber Defense Competition) event. Don McLane, who helps to organize and sponsor the event through coordination and support of the Institute students gave me some notes from last weekends experience.

The scenario was well balanced. Student teams did have enough time to harden their systems. The Red Team (attackers) soon figured out the systems and exploited any exposed flaws. Thank Brian Hay at the University of Alaska for a good design there. 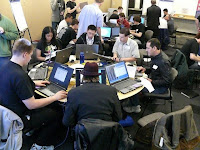 There was an interesting dynamic on the floor. Although teams were really competing against each other, they felt like they were all against the Red Team. I noticed one occasion where someone overheard another team member describing a problem; he scooted over and whispered "our team figured that out, here's what to do ...".

Setting up the competition was an adventure. Thursday morning I drove to Microsoft with a truck full of routers and switches. We set up everything in record time. The next day, Brian Hay would fly down from Alaska with all the operating system images and we'd finish up.

Then I got the call: all flights from Alaska were canceled because of volcanic ash. I spent the entire night downloading 60 Gigabytes of data from Alaska. 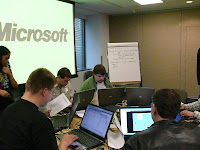 Friday, even though we were constantly on the phone, there were more details than could be handled in the bandwidth of a phone call. We called a few volunteers. A couple people from Microsoft stopped by to see how it was going; they were immediately recruited to help troubleshoot. The team effort was incredible.

Luckily, the Alaska team did make it down the next day for the competition.

Don also provided some pictures from the event. The rest can be found here.
- March 31, 2009