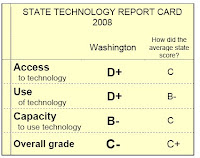 Education Week put out a special report as part of its Technology Counts 2008 report. The document called “STEM: The Push to Improve Science, Technology, Engineering and Mathematics” is a supplement to the main report and “surveys the states to assess the status of K-12 educational technology across the nation in terms of access, use and capacity.”

It awards grades, as educational institutions are conditioned to do, based on 14 different indicators that are related to the above three areas.

According to the report, the state of Washington received a B- in Capacity (to use technology), which was better than the average C grade of the combined states.

However, the report bestowed a D+ grade on Access (to technology) and Use (of technology), giving the state an overall C- average compared to the average state score of C+.

Disappointing to be sure, and it is likely that the state will have to be punished by taking away its iPOD, television privileges (it can no longer watch “Greek”) and absolutely no prom unless it brings its scores up immediately.

Which it is apparently trying to do:

The news tribune’s Kris Sherman reports that “A new wave of up-to-date computer equipment is coming into Tacoma schools. About half of the computers in the district's elementary and middle schools will be replaced in the 2008-2009 academic year with laptop PCs on mobile carts.”

Perhaps this is the little bit of extra credit we need to nudge that Access grade up to at least a C.

Mind you, I expect better grades next year. School is important, and if this state wants to make something of itself when it gets older, it should start buckling down now. Wipe that smirk off your face when I’m talking to you, young state. Next thing you know you will be throwing out minimum math requirements testing and hanging around on some street corner.
- March 28, 2008