Dextre Up and Running: Now What? 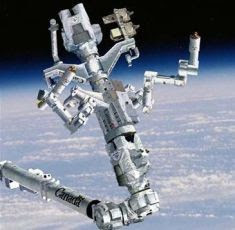 The Astronauts from the shuttle Endeavor delivered, installed and have now outfitted Dextre for his duties on the International Space Station. The newly arrived robotic maintenance man, with 11 foot arms and 12 feet of height, will save those astronauts from much of the routine but potentially dangerous spacewalks that they must perform.

The Canadian built robot was delivered last Wednesday and is no doubt looking forward to his first assignments.

As reported by Ed Stoddard for Rueters news service, on that very same Endeavor flight, the astronauts delivered a storage room for an "elaborate Japanese laboratory that is due to arrive during NASA's next shuttle mission in May."

And as I mentioned mid February, some University of Tokyo researchers have teamed up with members of the Japan Origami Airplane Association and are hoping to develop a paper aircraft capable of surviving the flight to the Earth once launched from the International Space Station.

Hmmmmmm. Coincidence? Maybe. In a way Dextre almost looks like a giant hand. Maybe this versatile robot could FOLD the paper airplane to fly down. Too difficult, you say?

Well look at this!! 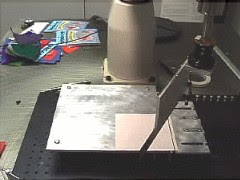 Someone has to do the origami folding to create the paper airplane to be flown to Earth. Perhaps Dextre is the robot for the job.
- March 19, 2008

Email ThisBlogThis!Share to TwitterShare to FacebookShare to Pinterest
Labels: Origami, Tools and Devices

I just watched the video of the paper hat being folded and wondered how far that technology could go. It would be incredible to see what could be made if a machine did all the folding. Unfortunately, a machine can't experience the feeling of accomplishment (or frustration!) one gets when creating something out of a piece of paper. Also, maybe Canada should add another "hand" to Dextre to help out with the tougher folds out there in space.