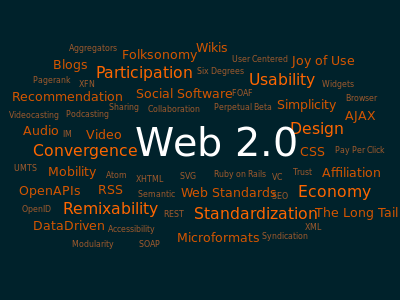 I am at a small loss.

I wanted to talk about Web 2.0. I still do. My hope was to give a simple explanation of what it means, so that the people I want to converse with and share information with would have a basic starting point for those discussions. The intent of this blog, most of my writing and the courses that I teach is to provide the average individual a general understanding of the technology that is changing the way we live, work and play.

I wish it was that simple. The first mentions of Web 2.0 are from three years ago, and that was in preparation for a conference. You would think that by now it would have firmed up into a more manageable definition. Unfortunately it has not. Since then it appears to have formed into two philosophical camps between technology authorities of unquestionable standards and experience, and also become an almost impenetrable marketing buzz for most new technology companies with any sort of web presence.

If you would like to dig into the detail a bit more, here are the best links to get started.

First up is O’Reilly, one of technologies definitive authorities, who have claim on coining the term itself. Here is their document from late 2005 which tells us “What is Web 2.0”. To lend my shorthand to it, and for what it is worth, Web 2.0 exists when the web is used as a platform on which groups harness their wisdom through collective intelligence and data storage.

Up next is the man himself, the father of the World Wide Web, Tim Berners-Lee, who to take a chunk out of an interview last year says this…

LANINGHAM: You know, with Web 2.0, a common explanation out there is Web 1.0 was about connecting computers and making information available; and Web 2 is about connecting people and facilitating new kinds of collaboration. Is that how you see Web 2.0?

BERNERS-LEE: Totally not. Web 1.0 was all about connecting people. It was an interactive space, and I think Web 2.0 is of course a piece of jargon, nobody even knows what it means. If Web 2.0 for you is blogs and wikis, then that is people to people. But that was what the Web was supposed to be all along.

His current passion is the semantic web which he talks more of in the interview.

Internet authority and author Paul Graham gives it a go in one of his essays.

As for the marketing buzz, I can only say get used to it. That is the nature of getting peoples attention and selling product. I remember when our product version jumped from Word for Windows 2.1 to Word for Windows 6.0 and it wasn’t because it was 3.9 better. More to do with the fact that WordPerfect for Windows was in its 6.0 version.

In closing for today. Here is where I want to get started. The collaborative, social networking revolution that we are in the middle of today is the heart of the web’s next iteration. To understand more, learn of blogs, wikis and RSS to begin.
- July 02, 2007

Email ThisBlogThis!Share to TwitterShare to FacebookShare to Pinterest
Labels: Living and Working Virtually, Your Digital Double