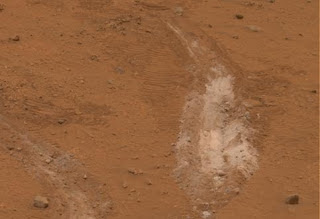 The image to the right is from the www.nasa.gov website.

“NASA's Mars Exploration Rover Spirit has found a patch of bright-toned soil so rich in silica that scientists propose water must have been involved in concentrating it.”

It was taken only last month. That is three and one half years after the mission began. What I remember most vividly about the early days of the mission were the pictures that the Rover began to send back. Would there be water? Would there be Furbies? What we got from the middle of a crater were pictures of red soil and rocks. And those pictures were fascinating. In particular I loved the 360 views that were provided.

In 1969, during the Apollo 11 mission, Neil Armstrong took “"one small step for man, one giant leap for mankind" onto the surface of the moon. It was monumental not only for the historical moment in space exploration, but for the pictures that were sent back. It is funny how there are still hoax theorists challenging the images.

Today, it’s like being on the mission itself. The NASA site is abundant with images, videos, interactive flash and information about not only the past, but the recent present and real time. Check out the mission clock on the Shuttle’s main page.

The shuttle Atlantis just launched on NASA’s most recent Space Station mission. Would you care to know watch’s happening today?

“The STS-117 and Expedition 15 crew members will put on their construction hats today to continue the assembly of the International Space Station. They will use the station’s robotic arm and conduct a spacewalk to attach and activate a new truss segment.”

There is an anecdotal story about a researcher who had been given time to use the rovers to collect data for his work. Unfortunately, the only time they could give him fell right in the middle of a family vacation.

Instead of cancelling the vacation the researcher visited a local Starbucks and logged into a secure NASA page, which he used to send the rover commands and conduct his research.

This of course begs the question, if a scientist can run a robot on Mars from a Starbucks, why do I have to go to the office every day?

Great question. Mind you, I have seen you run a theater right out of a laptop, which is pretty darn cool.