Junie B. Jones and the Tacoma Childrens Musical Theater 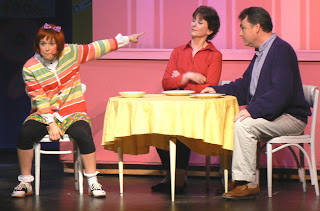 In 2006 The Tacoma Musical Playhouse launched the Tacoma Children's Musical Theater. I was very lucky to be in one of the first productions when it launched, "The Wind and the Willows" directed by Nancy Wilkinson. One of my fellow actors in that show, Chris Serface, is now the Director of Education for the TMP and directs June B. Jones and a Little Monkey Business, the children's show currently running at the theater. Adapted from the book by Barbara Park with book, music and lyrics by Joan Cushing the story follows Junie B's difficulty in accepting a new member to the family while at the same time deciding what to bring for show and tell.

She won't have anything to do with her new baby brother until she hears Grandma refer to him as the "cutest little monkey." Junie B. can't wait to bring the best show-and-tell to class: a real live monkey! With lessons of identity, change and the inevitable trials of childhood woven with a little mischief ("monkey business"), this show is not to be missed! 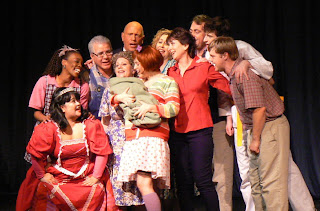 The Tacoma Children's Musical Theater was an opportunity to bring more fully produced musical shows to the South Sound, specifically aimed at young audiences and families. Junie B. Jones is not only a fun show full of great actors, (everyone does a great job, but the Show and Tell scene is not to be missed) ((Taylor Niemeyer who was "Dorothy" from TMP's The Wizard of OZ is a PERFECT Junie B) but it is a testament to the work done to bring children in to see musical theater. We had a sold out show last Sunday, a full house on Tuesday and had to add an additional performance on Thursday to accommodate all the elementary school classes that wanted to come see the show. This weekend is close to selling out and it is a shame to have to turn people away at the door, especially with a 300 plus seat theater.

What has also been fun is the atmosphere in the lobby after the show. Whereas in the mainstage shows it is a tradition for the actors to great folks after the performance in the lobby, in the kids shows it is a bit like a character greeting at Disneyland. The actors who play Junie B, Lucille, Grace, Meanie Jim and Crybaby Williams are all big draws, and get to sign autographs and take pictures.


Junie B. Jones and a Little Monkey Business
Directed by Chris Serface

Here is a bonus Rat and Toad picture from 2006 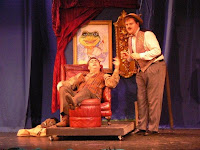