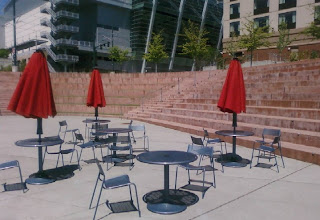 I went down to Starbucks for an iced tea today and it was reasonably crowded. I left the store and was headed back down Pacific and around to the office when I noticed the new furniture in Tollefson Plaza.

Having once before entered into "the space that wants things to happen there", I decided to take advantage of the additions and try them out. One of the things that concerned me from a distance was that it appeared to be several separate small patio furniture-like pieces, which might easily be picked up, thrown into the back of a truck and hauled away.

Not the case. Not that someone foolish and determined couldn't do it, but these chairs and tables are more than meet the eye. When I pulled back a chair to sit down I was surprised by it's heft. It is one solid piece of movable sitting space. I then took hold of the table and sure enough, though not anchored it was incredibly dense and heavy. Good. I also noticed that there was a large chain link and lock around the base, so that if several of these pieces are locked together, they are not going anywhere.

So onto the sitting experience. First off, it is a beautiful day, which helps. I didn't sit under any of the umbrellas because the sun felt good. Believe it or not, there was a bit of activity all around, and it was not that close to lunch time either.

There were a couple other people who wanted their own little corners of Tollefson to themselves, but if they had wanted to come join me I would have been all for it. "Come on over here person that I don't know", I wanted to yell, "Share this chair and table with me". I chose not to because I liked that they were using the Plaza and didn't want to scare them off.

The car traffic, which cuts off one side of the park, was actually a simple diversion. People walked back and forth from both sides of the street, with some bus traffic from the stops as well. And then, every few minutes, the Link would rumble by in either direction.

All and all, I liked having the table and chairs there. Sure, you can sit on the steps or the grass, but that feels like improvisation. The chair clearly beckons and the table top allowed for me to set my tea down on occasion. A man, walking away from me across the plaza, let a paper cup drop from his hand to the concrete. Traffic noise probably kept him from hearing me yell, "pick it up...!" plus an identifier as to who I was speaking to, so I just picked it up myself on the way out.

A couple more obvious trash receptacles would be nice.

Also, how about something spraying UP from the fountains. From where I was sitting you don't see any water feature. Something to plunge into, a'la a refreshing Tollefson Ice Tea.
- June 30, 2009

Email ThisBlogThis!Share to TwitterShare to FacebookShare to Pinterest
Labels: Tacoma

your experience reminds me of the film THE QUIET EARTH.

I did at one point stand up and declare myself the "President of Tollefson Square".

Descent into madness aside, it was overall a pleasant experience.

Nice, and not too crowded!

Now...if only there were some trees for shade!

I love it! -Kristina