The Phantom Tollbooth and the Mathemagician 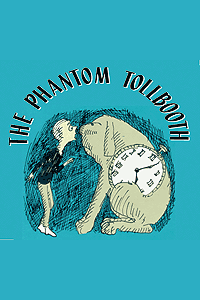 Starting the weekend of January 10th and running for two weeks with shows on Saturday and Sunday, the Tacoma Children's Theater will be presenting Norton Juster's "The Phantom Tollbooth". There are also two weekday shows that have been arranged especially for school children.

Rehearsals have just started, and I will be playing the Mathemagician, ruler of Digitopolis. The book for the show does an excellent job of keeping much of what makes the children's book so wonderful. Lots of word play and a lesson that is engaging for children and adults.

This is one of my all time favorite books, so I was thrilled and grateful when I was cast in the show. I have a paperback copy from when I was a kid, and bought hard back copies for all four of mine. I read it to each of them before they could read themselves, and the older ones encountered it again in school.

A boy, Milo, arrives in the Land of Wisdom through the tollbooth, and finds it in disarray. The two Kings, brothers and rulers of the cities of “Dictionopolis” and “Digitopolis” have argued their whole lives as to whether words or numbers were more important. When the princesses “Rhyme” and “Reason” were asked to decide the question, the answer was unsatifactory to either brother and the two are banished from the kingdom, and are now being held prisoner beyond the Mountains of Ignorance.

Realizing their error, they wish Milo well as he goes forth to rescue them aided by a trusty time-keeping dog who goes tick, and whose name is Tock. The journey is treacherous and the two meet many demons along the way, such as the Trivium and the Senses Taker.

I am looking forward to wearing my robe of numbers with my Number Two pencil as a staff and singing "Subtraction Stew". I will no doubt post pictures when they are available. Could the upcoming show and the recent gains in Math reported for U.S. students be mere coincidence. I think not.
- December 10, 2008