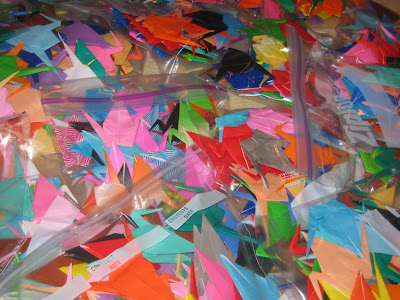 After November 21st, which is the South Sound Technology Conference, I am going to get to work finishing another project that has been in the works for awhile. Some time ago I began to fold a thousand cranes on my own, just to satisfy one of those things you set out to do before you die. The cranes piled up and I boxed them away, with an idea of what I hoped to do with them.

The idea is to hang them, in formation, in the creation of one very large crane This would would represent the 1,001st crane. However, one big question left was where I would hang it. My wife would not allow it to take up to much space in the living room, and why even have it in the ceiling space of the garage if no one could see it.

After conducting a few origami classes at the UWT library, an idea was formed in conjunction with the origami displays that we put together there. The crane could hang as a display from the rafters of the Graduate Library reading area. At least for a while. To read more about it, check out this article from the University of Washington, Tacoma's student newspaper The Ledger.

Two challenges remain. Both you can help me with.

The first is that although I folded over 1,000 cranes as part of my mission, over time I have given away hundreds back to children and used many others to create my "Escaping Cranes" displays. I need to replenish the flock.

Uwajimaya, a wonderful Asian supermarket and bookstore, was kind enough to donate 100 sheets of black origami paper for the project. Thank you to Anna Sayler for making the ask. I will use these to accentuate the outline.

The second one is critical and I need your advice. I don't want to attempt to hang them mobile style so that the move in circles or with any breeze. I have the oval frame and fabric to run the lines through if I wanted to use this technique, but I am hoping to create more rigidity.

I am thinking of a thin metal wire frame to run them along and hang in the center of to create bulk, but don't have the expertise to create it.

If you have worked with wire frames or welding thin pieces, I would love to hear from you.
- November 08, 2008

Email ThisBlogThis!Share to TwitterShare to FacebookShare to Pinterest
Labels: My Art, Origami, Tacoma

Hi Andrew,
Acoustical ceiling wire comes in a variety of gauges and can be rigid enough to hold a specific shape. It can be bent to accommodate the shape that you can use for your cranes (ex. a kite shape with a head and a tail?) with a center tying point. You'll probably need someone who can spot-weld a couple of pieces together for you.

You might want to check out the work of these artists; http://www.handsart.net/rabble.html

They have done installations in many places where they have created shapes and forms with hanging objects. The link is to a piece they have at the North Carolina Museum of Art, and it is of an airplane created with mylar butterflies suspended from the ceiling.

Sadako and the Thousand Paper Cranes was one of the best books I read in elementary school. It made my third grader mind so sad and confused about why people can't just get along.

I think the 1000 cranes to make 1 will be awesome, but unfortunately I don't have any idea what the best way to make a frame would be. The escaping cranes thing is super cool though. It makes me want to go get a big vase and some origami paper.