Singing the Praises of Dr.Horrible 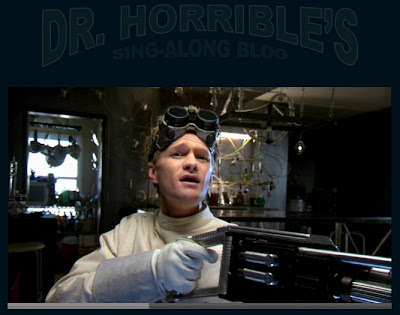 I have been a Joss Whedon fan for a long time. I was a faithful viewer of Buffy the Vampire Slayer and Angel. I also enjoyed the episodes of Firefly that I saw as well as the movie made for the theaters. Buffy had a great run and it was nominated fourteen times for an Emmy, of which it won two in the categories of “Outstanding Make Up for a Series” and “Outstanding Musical Composition for a Series (Christophe Beck)”. It should have won more.

In a difficult category for a drama/horror/humor show to win in, Joss was nominated for “Outstanding Writing for a Drama Series” for “Hush”, which used very little dialog and provided some nightmare fodder (for me at least).

But one of my favorites to this day was nominated again in “Outstanding Musical….” ( I have deliberately used the dotdotdot) called “Once More With Feeling”. They episodes songs were written by Joss and the episode of the show itself still has a strong following. A demon causes all the characters to break into song to express their feelings and the whole show is done as a musical. As a bit of trivia, Joss wanted to do the episode earlier but it was pushed to a later season and in its place “Hush” aired.

I loved that stuff. 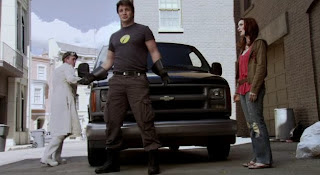 And now I get more of it in the form of “Dr. Horrible’s Sing Along Blog”. Showcased in the form of an evil scientist’s (Neil Patrick Harris) video blog, a lovelorn villain trys to gain entry into a prestigious evil league, and must prove himself by demonstrating his prowess through a crime. In his way is Captain Hammer (Nathan Fillian “a corporate tool”) and the woman he loves (Felicia Day). This is done with humor and drama, but most importantly song.

That this is being presented as a web series in limited episodes makes it all the more interesting to me and I look forward to reading how it succeeds in this format. Given the length of the episodes, it could have easily been a one hour television show, or part of an anthology series. I am glad they are swimming in Internet waters.

The dialog is funny, the video blog format gives way to more traditional storytelling both on the scenes of the heist and in the Laundromat. The singing is great and the three lead actors are excellent in their roles, the supporting characters that show up really lend well to the humor.

Presented in three episodes, the first two are available for viewing now. The third is scheduled for July 19th.
- July 17, 2008

I'm a major Joss Whedon fan as well, and I've been looking forward to this "Internet Miniseries Event", as he calls it, for some time now. Joss mentions in his "master plan" that he eventually hopes to put the whole episode out on DVD, with one of the extras being a full commentary done completely in song. Can't wait, and thanks for singing his praises. Now we just need to work on him cranking out another "Firefly" movie!

Thanks for pointing the site out to me and then making me go see it, threatening me even, if I did not.

I have read more about it since then and it sounds like we have to move fast if we want to watch the third episode for free. It apparently comes down on Sunday and will then be sold off of iTunes or later as a DVD.