The Sunniest Funniest Puppet You Ever Could Hope To Know 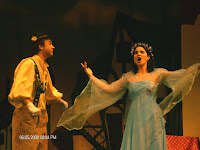 Mr. Fox.
Mr. Cat.
Could we both have seen that?

This Saturday "Pinocchio" opens at the Narrow Theater for a two week run.

This will be the third production I've been in from the Tacoma Children's Theater, and though I do love the Main Stage, I think children's shows are a kick in the pants.

They are right up my alley, as it is hard to overact in a kids show.

When I received the script for the show, (I am a villager and Signore Volpone the Fox) it seemed familiar. Then I heard the music and smiled. I remembered seeing this particular production when I was a kid. The music is fun, the story is familiar and the show runs about 75 minutes (plus a short intermission) so it is great for a matinée.

The cast is made up of some great actors with a lot of singing and stage experience, both adults and kids. I won't start naming them all off, but I will give mention to someone I'm working with for the first time, Henry Nettleton, who is a great Pinocchio. I am also happy to be in a show with my daughter Delaney who is a villager and one of the evil toys from the Land of the Toys (as opposed to Disney's Pleasure Island).

Maria Valenzuela has done an excellent job of assembling a cast, directing and scheduling rehearsals around some tough schedules (it seems like half the cast were in other shows leading up to this one including "Man of La Mancha" down in Olympia, "Alice in Wonderland" which just finished as a TCT entry and in rehearsals for "Grease" the next Tacoma Musical Playhouse main stage show).

And, if you are wondering, there is a Monstro, and he does swallow the wooden puppet.

Here are three pictures I took during last nights rehearsal:

The Blue Fairly and Pinocchio sing "You Can Talk". 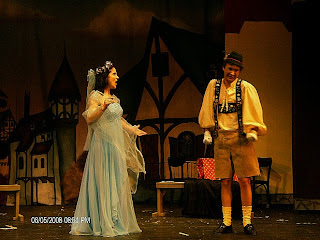 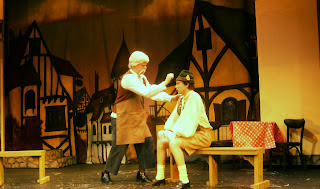 The toys and the Coachman (note: I wanted to show something but so many of my pictures just didn't turn out that I saturated one with effects to give an idea)

Here is a nice review from the Tacoma Weekly.