A couple of weeks back ABCnews featured a story that caught my eye. It was in regards to a new robotic fish under development. There have been robotic fish in the past, but this one can communicate underwater, which is a new development. Therefore it can coordinate with other robotic fish, perhaps even in schools (my suggestion). They mention it does not look fish like, but moves fish like. As the article reports,

"Kristi Morgansen, assistant professor of aeronautics and astronautics at the University of Washington, calls it "bio-inspired."

"Instead of a propeller, which is noisy, inefficient and easily snarled in weeds and ropes, her fish are pushed along by a fin that flaps back and forth."

This allows for propulsion on one end and electronic gadgetry and systems in the rigid front area.

However, if they would like to make it look like a Koi or other fish, then they can swap technology with watchimpressions or Essex University. There work can be seen on YouTube here and here respectively.

Of course I am not certain if I would be able to dispose of them like deceased pet goldfish if they broke down.

That is a question I can ask yet another University of Washington faculty member at the 2008 WTIA board retreat, which is coming up next week. In a presentation call "Neurobotics: Interfacing Robot and Nervous System to Understand and Enhance Human Movement", our guest speaker, Yoky Matsuoka will be discussing this new field that lies at the intersection of Robotics and Neuroscience.

From her bio at the UW web site.

"In the Neurobotics Laboratory in Computer Science and Engineering, robotic models and environments are used to understand the biomechanics and neuromuscular control of human limbs. In parallel, robotic systems are developed to augment, replace and rehabilitate damaged sensorimotor functions."

Yoky Matsuoka is an Associate Professor in Computer Science and Engineering at the University of Washington. She directs the Neurobotics Laboratory where robotic models and environments are used to understand the biomechanics and neuromuscular control of human limbs".

This will be extremely interesting.

Maybe I can also ask what she thinks of the Roomba.

Our vacuum is acting up, and this may be my chance to try one of these out. It comes from iRobot, and is now one of many consumer available robots they sell. Now, along with the Roomba, which has been around for awhile, they also sell, the Scooba (not to visit the fish robots but to clean hardwood floors). the Looj (for gutters), the Veera (for pool cleaning) and the ConnectR (for virtual visiting). They also sell the Dirt Dog, which is not a robotic pet.

That will probably disappoint this kid. 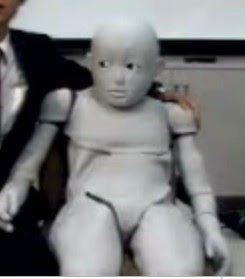 Email ThisBlogThis!Share to TwitterShare to FacebookShare to Pinterest
Labels: Living and Working Virtually, Tools and Devices