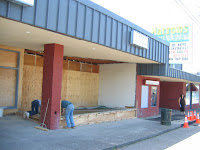 Back in July construction was being done at the Tacoma Musical Playhouse over on 6th Avenue . You may recall this exterior view.

Phase One of a reconstruction of the entire facility is now complete. Added adjacent to the old theater were a green room, bathrooms and dressing area for the actors (much better than having to change in the aisles backstage). For that the actors are grateful. Unfortunately I do not have any pictures.

However, at last nights dress preview of Meet Me in Saint Louis, Julie was able to snap a few photos of some of the other improvements.

The entry to the the theater has shifted to the left of the entrance where formerly a different facility existed and has added to the size of the lobby substantially. 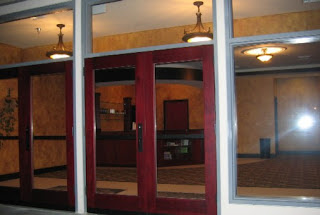 As you enter, new floor tiling might catch your eye. 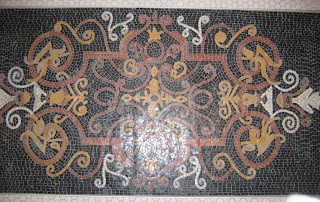 The concession stand is now on the other side of the longer lobby with far more room to serve patrons. 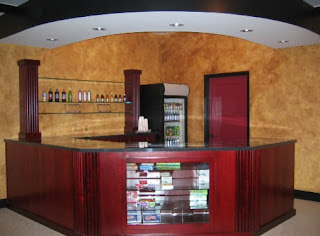 Now gone are the overhead tiling squares and dingy lighting. In there place a higher ceiling and beautiful lights with accents and recessed lighting surrounding room. 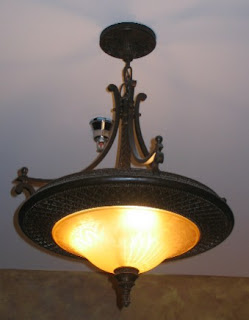 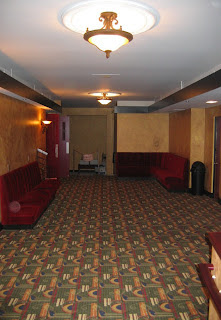 To do it justice you have to see it, but here are the artist conceptualizations that represent the larger view. 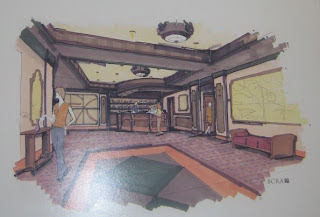 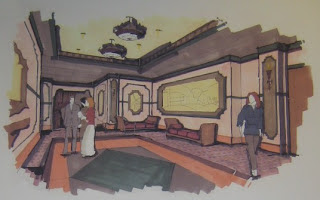 But in the end, the single greatest improvements to the theater going experience were to ...........

Anyone, especially if you are a woman who had to deal with a line during intermission created by the grand total of two stalls, can appreciate these changes. 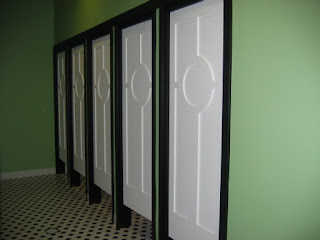 And there is a SECOND line of them on the other side. 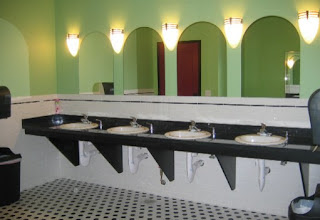 I suppose that it is fitting that the next show I will be in at the theater is Urinetown. More on that at another time.

These improvements benefit greatly the experience of the actors and patrons of the theater. In the next phase, an orchestra pit for the fine musicians who make live accompaniment a hallmark of the shows performed at this musical theater.
- November 30, 2007

Email ThisBlogThis!Share to TwitterShare to FacebookShare to Pinterest
Labels: My Art, Tacoma, Theater

Haven't seen a play there since Little Shop of Horrors, so I am looking forward to seeing the improvements. Hope to see you in Urinetown.

This is your niece... I just wanted to say that I told my mom that I wanted to try and see Urinetown before I leave for San Diego. It starts soon, yeah? Also, those bathrooms are beautiful! I love the green.

It starts Jan 11th. If you don't have to head back to SDU before then it would be great if you could come see the show.