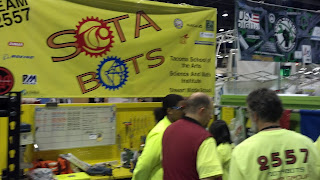 You may remember a few years back with the FIRST Robotics competition was held in the Tacoma Convention Center. Back in 2008 SOTA, with the help of Bellarmine Preparatory School entered their first robot into the competition and came in second place, also taking rookie of the year honors.

I was able to attend the FIRST competition last Friday at the CenturyLink Exhibition center and it was as fun as always. These competitions treat the engineering and science competition as if it were a rock concert. Music was blaring, bleachers were filled with cheering fans, many people were dressed in costumes or as mascots for the three on three basketball competition being waged in two large arenas. 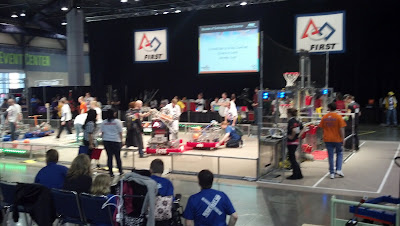 For those who wonder where the future Computer Scientists, Computer Enginhttp://www.blogger.com/img/blank.gifeers and Information Technology professional may be coming from, it is definitely time to check out this event. I didn't get the official count but their were around 45 different teams competing and cooperating at the event. Two students from a visiting California high school gave myself and a fellow WTIA board member a tour of the grounds and a walk through the pits. One of the high schools had 80 team members. Four visiting HS teams were from Turkey.

Bellarmine was there, as was Puyallup High School and SOTA as well, this year creating a super team with the students of SAMI.

I hope next year that I keep a close enough eye on the calendar to promote the event to others.

Here is a much clearer set of pictures from the event from the Seattle PI.
- March 30, 2012