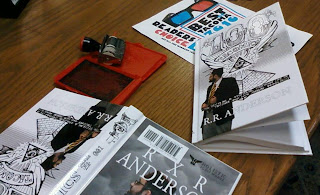 Last night I had the pleasure of attending a book signing for Tacoma political cartoonist, artist and web designer, RR Anderson, who officially released the much-anticipated 100 Tacomics: The Secular & Apolitical Cartoon Life of Tacoma and her Moral People(s). If you have ever been amused, aghast, enlightened or deeply offended by one of this Tacoma's cartoon-legion hero's work, then this book will provide you the necessary fodder to laugh, wince and shake your head once again.

The Tacomics included in the book are drawn from what he has drawn for the last four years or so. Actually there have been some really interesting Tacomics that won't make it in because of their appearance in 2010, but that is OK. Ryan announced that he is working on the next edition, composed of work done through 2010 to 2012 at the signing last night. He promises that he will produce one every Tuesday in order to make that happen. Just because he would be doing that anyway should not diminish the anticipation of the upcoming sequel.

Though in book form, it cannot repeat the appeal of working your way down the comments section that accompanies each new Tacomic as it is posted, it provides a equally valuable experience by including commentary from the man himself. He describes much of the inspiration of what went behind each comic, and when no inspiration existed, he admits to it. Additionally, information on the Frost Park Chalk Off, the secret society of Tacoma, "The CLAW", and other bits and pieces of Tacoma are generously included. That makes this a must have history book as well.

I am pleased to have my signed copy from the event, which I purchased at King Books. I also bought one from www.lulu.com, which I will likely place in the Christmas stocking of someone I know. Anonymously.

The one I have will go on the bookshelf, strategically place high enough that my kids will have to be tall enough so that when they stretch to reach it, they will be old enough to stretch their minds on the topic of Tacoma's political scene.

It will be next to my original drawing of the Tacomic, "Who Control's The Tacoma Media".
- November 16, 2010

Wonderful write up sir. I'm rallying for those stretched out little fingers. THE TRUTH ROCKS!

I like the book because I'm featured on many pages; with my clothes on!

Second Book of Short Stories Out on Amazon

During the last year I wrote four short read collections called the Three Twisted Tales . Today they are available in aggregate as The Clock... 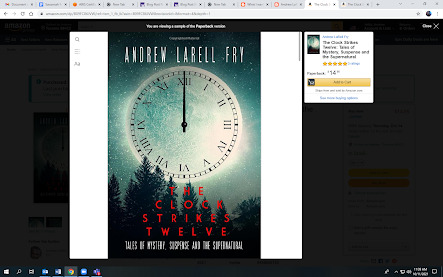