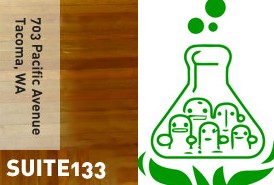 For those interested in how last weekend went, it went well.

When the decision was made to try to hold something like a Startup Weekend it was meant to be a dry run. Recruitment for the weekend was done through blogging alone and a few direct email inquiries of those who had mentioned an interest in the past.

The location was great, given Suite133's experience in hosting the earlier technology based "unconference" called barcampTacoma.

There were two outcomes on the attendance side that concerned me. If we had less than 12 participants I was going to be disappointed, if we had more than 30 I am not sure how I would have handled the logistics.

On Friday night, we had 16 people participate. A few of them made it clear that they were unable to come for the full weekend and just wanted to join in on the first night of discussion. I am glad they came. Given the size of the crowd, everyone was able to introduce themselves and talk a little bit about what they could contribute.

By 7:00pm we were suggesting potential business ideas, with an understanding that there had to be the chance that it could be launched over the next two days. Ten ideas were discussed, which was a good amount. We then voted on the favorites form that ten. Of those five were pretty even in the voting so we held a second vote. One idea which was pretty popular had a second idea, which was more of a feature than a product or a business was folded under another that was a broader solution.

Critical to the final selection was feasibility for completing at least a prototype, so though one idea was popular, another made a great deal more sense.

Here is where we were very lucky. In order to successfully create anything, the talent to do so had to be in the room and ready to work. We had marketing, business planning, design and development experience represented at the Suite. There were four people with ties to the Institute of Technology at UWT, not counting myself. Two alumni of the Computer Science program and two current students.

David Hazel, alumni of the program and veteran of three official Startup Weekends was key to making things work. Not only was he able to give us guidance on how we were doing and what to expect in the next couple of days, but he was well versed in Drupal, a web content management system with enough open source elements that we could create a web site with much of the functionality we were looking for.

Another thing that David prepared us for was the drop off in attendance, which given those who had already mentioned their lack of availability was not a surprise.

On Saturday we spent our time discussion the build out of the idea as a business, how they a Startup Weekend generally handled ideas such as ownership and went to work building the site.

A total of 12 people participated in the second day, with the nice folks from Spryng came by to talk about there entrepreneurial support efforts and to discuss their upcoming conference.

David trained several of the other participants in how to build with Drupal, and on Sunday, six folks worked to get it done.

At the end of the weekend, a working prototype was completed, including some Flash animation in a subsection of the site. Was it launched? No. It needs to complete the remaining implementation of a couple of the features and needs to be given a facelift to better represent the target audience it is aimed at.

The team set up a Wave thread to keep it moving forward, and there is a hope to bring it into the public eye when that is done. It needs to be populated with data and then it is ready to go.

It was a rewarding opportunity to meet and work with great people, to learn about new tools and technology and to gain the experience of what a Startup Weekend is like. Hopefully Clint Nelson and the folks from the official Startup Weekend organization can help us pull off an even bigger event in the late Summer.
- February 06, 2010

Sounds like the weekend went well, although that's not why I'm posting!

I just sent you an e-mail with some info I thought might pique your interest. I just want to make sure it doesn't end up in your junk mail by accident since we haven't corresponded in a while. I sent the message from my work account (mbottorff@pti-consulting.com).

Also, I'll be in town Monday through Noon on Wednesday, but I'm booked pretty solid, so I don't know if I'll be able to make it down to T-town for a visit.