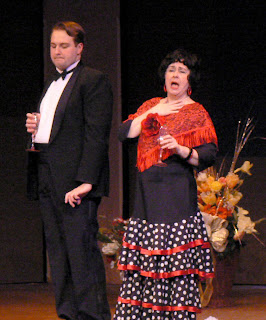 Monte Python would announce it as "And now for something completely different" from the Tacoma Musical Playhouse. I knew it was a Northwest premiere and had an incredible run in London, and I also knew it was based on a true story, but in general I didn't know what to expect from "Glorious" by playwright Peter Quilter. Jon Douglas Rake, the managing artistic director at the TMP, had described the show to me not as a musical, but a play with music. However I did not know what that meant.

What it meant was that there wasn't the usual big song and dance numbers like you might find in most of the Main Stage shows at the theater. Oh, there was music that was sprinkled throughout, but with the exception of one Cole Porter tune, it was not the caliber you would expect from the talented musicians that you find on stage there. Especially from Sharry O'Hare, who has such a strong, beautiful voice and plays the shows lead, Florence Foster Jenkins. It was bad. I mean really bad. Wonderfully, rib ticklingly and finally hilariously bad. As I left the theater after having thoroughly enjoyed the performances, I mentioned to her with high praise "it is hard enough for a singer to sing bad, but you sing bad so well."

And that is the point. The show is about a woman whose family has cut her off in order to keep her from the thing that she most enjoys, singing and performing, due to her generous lack of talent. But when she inherits her families fortune, she spends the rest of her life doing what she loves; putting on shows, recording records and playing to sometimes raucous crowds.

She has admirers such as Cole Porter and Tallulah Bankhead and many different ladies auxiliaries. But why? Though it is left to you to decide, I believe it is because she truly loves music and wants to share that love of music. She is living her dream with gusto and critics be damned. It is fortuitous that she is so awful that her concerts actually provide perverse enjoyment to those who attend.

And to those in the real audience as well. Because there are few actors in the cast, only six, and the songs don't come every ten minutes, it builds like a play should, introducing you to the characters and letting you get to know them:

* The non-English speaking maid, Maria (Maria Valenzuela) whose expressions alone communicate all you need to know, but with the translations provided, makes for very entertaining reading.

* Her not a fan at all, Mrs. Verrinder-Gedge (Jill Goodman).

I enjoy watching actors who I have worked with on stage. I was in "My Fair Lady" with Tom, "Kiss Me Kate" with Maria, and recently "The Phantom Tollbooth" with Jill. I have known Kat for many years and have admired Sharry in other productions.

It is a testament to the performers that by the end of the show I cared about the characters without giving thought to the actors portraying them.

If Florence Foster Jenkins were alive today I could easily imagine myself going to her show and truly enjoying the gaudy costumes, the pretension of fine art and the gusto with which that art was so innocently dismantled. Sharry O'Hare does it wonderfully badly so well.
- February 06, 2009

I saw the show last weekend, and it has three more weeks of the run, so go out and see it NOW. I have seen Sharry perform in other shows, but nothing matches this one--she is truly beautiful and shining in this production. Thank you for the notes on this show.