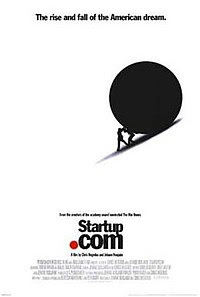 It has been about 10 years since the dot.com bubble began its burst. The pop was not audible at that time, but brothers Anthony and Micheal Perkins predicted it (though not as dramatically as it occured) in the 1999 book The Internet Bubble: Inside the Overvalued World of High Tech Stocks. The two analyzed 133 Internet-related businesses and advised investors who held these stocks to sell and as history has noted very few listened. I bought my signed copy at a Silicon Valley diner where V.C.s frequented.

They followed it up with a revisit to their predictions and of those 133 companies, only 10 have gained in value.

It is one thing to read about the eventual dot.com shakeout, and you can get a sense of it with "Burn Rate" by Michael Wolff, but it is quite another to live vicariously through the wild ride up and the steep drop down. You can do so by viewing Startup.com.

Startup.com is a documentary that follows two childhood friends who launch and build a web site solution called govWorks.com. The documentary filmmaker didn't know that those two years: 1999 and 2000, would be so full of drama for a web based company but there you have it. Even though you know what is coming and even see it happening around them, the story is fascinating and compelling as a peek into what it was like during that time. Because you are only shown 1 hour and 33 minutes of footage culled from 400 hours of digital video taken over a two year period, there are some obvious gaps in the storytelling.

But it is worth missing some of the business points, such as the fact the company actually started as Public Data Systems which provided software service to government agencies for tracking and payment. The company's money chase started when it was decided to launch it as a web portal. You still see pieces of history in a narrative form.

Among the many awards it received, it won the Directors Guild of America's Outstanding Directorial Achievement in Documentary award, an award for best documentary from MTV and was a Grand Jury nominee at the Sundance Film Festival.
- January 14, 2009