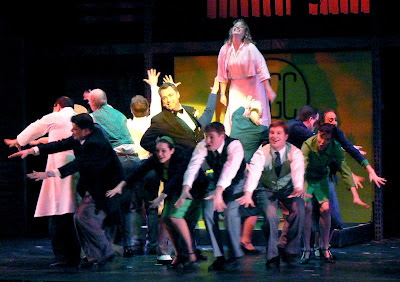 I have been very busy over the last week, as evidenced by the sparsity of posts. During that time I was wondering how that hard work was going to pay off. That's because we were in the middle of tech week for the opening of Urinetown at the Tacoma Musical Playhouse.

That means that for more than a week we were running the show and reworking the dance numbers, adding the costumes and props, adjusting to the sets and getting the rhythm of the lines down. Not to mention the music. That's me in the middle there surrounded by the good folks of Urine Good Company (or UGC as it is known for short) with my character's daughter, Hope Cladwell, on the desk behind.

Last Friday was the open and this Monday, yesterday, was the first evening free of rehearsal in 10 days.

And it was a very surprising opening at that.

I remember being in New York several years back and having a chance to see a show on Broadway. My two choices that evening were Rent and Urinetown. I chose not to see either as in my mind I was looking for a classic uplifting musical. For me that meant I wasn't up for Rent, and as for Urinetown, quite frankly, it just sounded awful. When I finally did get to see Urinetown, (ten Tony nominations and three Tony wins later), I loved it. I am still kicking myself for not seeing it that night on Broadway.

So it was with my initial reaction in mind that I wondered how Tacoma, and in particular the patrons of Tacoma Musical Playhouse, were going to receive this show with a terrible title. They had come out in force to see the last show, "Meet Me in Saint Louis", and in shows I have done there in the past, they packed the place for "My Fair Lady" and "Fiddler on the Roof", but then again it was a struggle to fill the seats when we did "Little Shop of Horrors" which was more well known than Urinetown and had been reviewed well locally.

I still joke that we could fill the Tacoma Dome if we put on "The Sound of My Fair Annie's Fiddler".

Well, I have learned that the South Sound is OK with something a little different. The theater was full Friday, Saturday and Sunday (which was a near sellout). Quite an achievement for an opening weekend. I wouldn't be surprised if the excellent job the Bellarmine Preparatory did when putting on the show last year helped a bit.

The house capacity for the Narrows Theater is around 330 seats which means that is a lot of folks coming to see a show. We have three more weeks of a run, with extra matinees on the final two Saturdays. My understanding is that some of those are already nearly sold out.

Congrats to Jon Douglas Rake, Artistic Director, and Jeffrey Stvrtecky, Music Director at the theater for putting on another successful show. The cast is made up of some incredibly talented folks who are great to work with. If you have the chance, come out and see the show with the terrible title. Thanks to Kat Dollarhide for the picture.

UPDATE: Here is a nice review by the Tacoma Weekly on the show.

The Tacoma Musical Playhouse has always filled a need in the Puget Sound for musical theater, and congratulations for what sounds like another great show. Break a leg!