In Just a Minutaur My Moment in Time Will Come 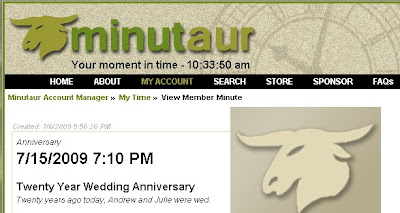 When will my moment come?

I have given the gift of a named star from the International Star Registry for someone. I have seen my name on a brick, or a plaque or a wall that commemorates an event or a donation or a campaign. These are crumbs that we leave which provide one of the trails that can be followed as a path back through our lives. (sounds like the catch phrase of a bad soap opera). We vainly attempt to affix ourselves to a place, as though we believe that any place has permanence.

But time is immemorial. (according to Wikipedia, "Time immemorial is a phrase meaning time extending beyond the reach of memory, record, or tradition. The implication is that the subject referred to is, or can be regarded as, indefinitely ancient."

Wow. I want a piece of that. I want my moment in time.

Certainly you can have a "place" in history. Perhaps you were lucky enough to have bought a pixel set from the "Million Dollar Home Page". Alex Tew sold pixels from a 1,000,000 pixel page for one dollar each and paid for his college education (and a few pints no doubt). But because it is finite, there are only so many people or companies that could have made their mark. Alex hit his goal, but now what?

I bought the Tacoma Dome for 18 dollars back in 2007 at www.dollaranacre.com. Nice. Dollar an Acre has sold online acreage around the world on a virtual map of the globe. However, my property value has not gone up over these last two years and no one really seems to care that I have laid claim of ownership to this digital representation.

So when will my moment come?

I could hope for the Governor to send out a proclamation that today is "Andrew Fry Day", but I would have to somehow earn that. Not happening any time soon.

If only there was a way for me to publicly claim that day for myself. (or to be less self centered, claim it for someone else in the hope that they will then claim one for me in return)

Well, set your watches. My first moment will arrive tomorrow on Minutaur. Minutaur is a new site that allows for you to purchase moments, days, weeks and months, which thanks to Elliot Trotter, will allow just about anyone to have their moment. How cool is THAT!

Concerned that they may have already sold out? Is their any time left? The brilliance of Minutaur is that time doesn't run out. OK, in certain cases, such as basketball games and McGruber episodes on SNL, time does run out. But there is always more time on the way, whether we are here for it or not!

This is usually the part of my post that I lazily cut and past information from the site I am talking about to give more information. But with Elliot's talent you can expect no less than a video segment explaining the site. So I will lazily embed the video.

Here is even more from Elliot:

The concept for Minutaur arose from discussions about how human beings connect and chronicle their lives. Time and memories play a major role in how we humans view the world, and beyond electronic or physical photo albums, there really wasn't a great way to connect a specific moment with a specific memory and to share it with the world. We tied that with the novelty of making it YOUR OFFICIAL TIME as a way to digitally commemorate your memory. That idea came in part from from looking at services that let you name a star in the sky for a loved one, and get a certificate to make it official. We figured, why not do that with time? Why couldn't 2009 be the year of Andrew Fry, or June the Official Month of the Google, or 6 am on May 5th, 1986 be my official moment of birth?

Though they sell time at Minutaur, they are also a social networking site. In this case they are creating connections between people based on events and shared moments instead of likes and dislikes.

And though time is fleeting, you can always get a certificate to commemorate your moment in time.
- July 14, 2009

What a cool idea. It's got me thinking about what moment in time I would like to call my own. hmmm..