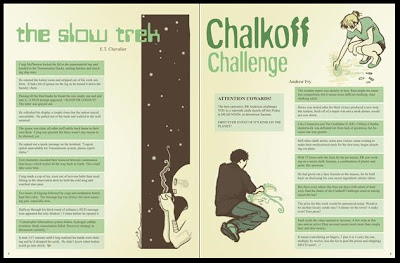 Quillpill continues to evolve as an enjoyable, micro-blogging writers application. More features are being added on an ongoing basis including mark up language addition and the ability to export your writing to email. The latter was added to provide support for the brave souls who are not only jumping into the NaNoWriMo (National November Writing Month) novel writing initiative this year, but are going to do so 140 characters at a time.

How might that get done? According to information gathered from one of their users on the site:

What does it take to write a NaNoWriMo novel on Quillpill? Here are some calculations from Aden Penn, who was our first user to express interest in using Quillpill for her NaNoWriMo participation:

So you would have to make generally 81 posts or more a day.

Another milestone for founders Derek Maune and Elissa Rose is that they have published the first quarterly literary magazine from submissions created from the site itself. "Quillpill Quarterly" hit the stands on September 9th and carries short stories, excerpts and poems from several of it's early users.

Quillpill announced the occasion on their blog and explained in part:

Quillpill has released the September issue of the Quillpill Quarterly Literary Magazine, “50-Cent Words.” We’ve hand picked some of the most interesting and highest quality work on Quillpill to showcase the mobile and micro fiction genre. The fully illustrated 24 page magazine comes to you with work by E.T. Chevalier, Aden Penn, Eric Rice, Andrew Fry, Freeman Powell, and Dennis Loney, Science Fiction author Ken Brady’s article, “Redefining Literature 140 Characters at a time,” and an interview with Quillpill author Nikolas Bates.

Included in the issue is the piece I did on the Chalk Off Challenge, so that is just one more milestone for the art slam happening at Frost Park of chalk to pavement.

Magcloud has a short review of it plus several page samples as well.
- September 12, 2008