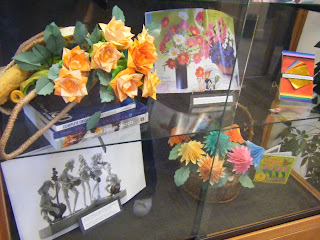 Not too long ago I held a small workshop at the UWT library on floral origami. Since that time the library hosted librarians from all the campuses over the weekend. As one of the many preparations for the event, they wanted to change over some of the displays and asked if I would be willing to showcase some origami, with contributions from the workshop. 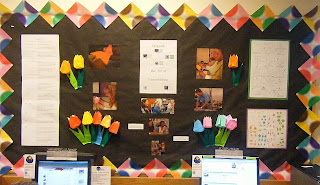 The workshop was fun, and as part of it we made some simple tulips, the traditional origami lily and some compound roses. You can see the tulips on the bulletin board that was created from the workshop and you can catch some of the lily's in the floral display case. The folks who were there were fun to create with and were gracious in letting some of the end models be used. 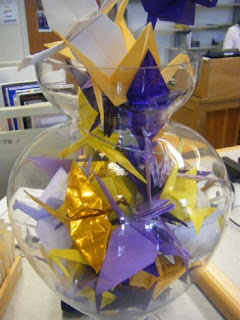 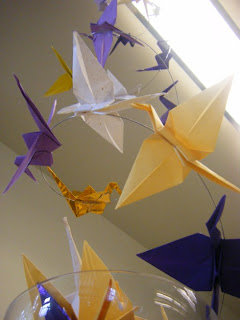 Additionally, I assembled one of my favorite projects which I call "escaping cranes". You may have seen them on this blog before. This time I went with the host colors and created a "Husky Escaping Cranes". For some reason I had a difficult time focusing the darn camera, so I don't have a good long shot as yet. I have included a poorly shot version just to give you an idea.

If you would like to make some cranes as part of a larger project, save Oct 9th and come by the UWT library for another workshop. 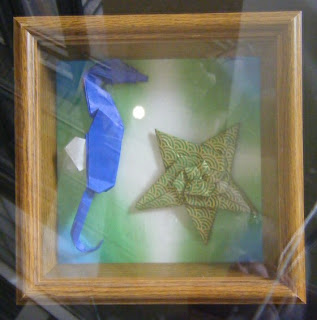 Professor Fry, what type of wire is used for the "Escaping Cranes" and which part of the crane is the wires hooked onto? Is anything else necessary or just wires as the basic tool? Also on average how many cranes should one expect to make to create a similar effect like this?